VED is an NGO based in Vranje. Its objective is to study, nourish and preserve cultural heritage. For several years now VED has worked in cooperation with other organizations with similar goals. It consists of people from various professions, age groups and religious and ethnic backgrounds. VED performs traditional music from the Balkans and Middle East as well as original compositions inspired by the rich tradition of music from the east, on traditional instruments. Initially the group of musicians playing under the name VED was constantly changing with various musicians performing from time to time… (@VedTrio). 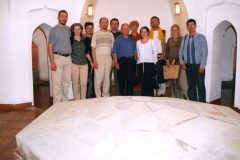